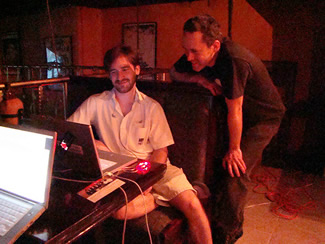 Boone Gorges, who is familiar to many of you as the homegrown rising star of our development team, recently traveled to Vancouver to take part in the Open Ed 2009 conference. From what I’ve gathered, Boone’s flights to Canada and back went relatively smoothly.

And indeed, far from missing connections, Boone was able to make some valuable ones, particularly with the development team at the University of British Columbia’s Office of Learning Technology. Knowing that UBC is working on projects that are similar to ours, Boone starting thinking about ways in which our Dev teams could do a better job of sharing things with one another — something that make sense, given the commitment we all have to open education. Boone speculated on this in a blog post titled “Sharing Hacks“:

Communication about code is a hard thing. On one end of the spectrum is internal communication. The gang at OLT keeps internal notes of the small hacks they do on their system, as do we at the CUNY Academic Commons. On the other end is end-user documentation, meant for a broad and largely non-technical audience. The kind of communication that’s missing here is the stuff in the middle, between groups doing similar sorts of work.

Boone ended that post by stating his commitment to writing more frequently on this development blog about the smaller issues of development. But his larger point — that those of us developing open-source educational platforms need to communicate more regularly with one another — is one that can’t be emphasized strongly enough.

And so, I will close this post with one of Boone’s central questions: “What are some good ways to get this kind of sharing moving?” His post, along with this one, represents a start, as does the revival of UBC’s development blog. But we need to build more lasting channels of communication soon, lest we miss some important connections.

Need help with the Commons? Visit our
help page Send us a message

Built with WordPress Protected by Akismet Powered by CUNY