I’ve just released version 1.2.3 of the CUNY Academic Commons. 1.2.3 is nominally a bugfix release, but it also happens to add a few neat features that are worth a short explanation.

As usual, there are also a number of bugfixes in this release. Of note:

For full details on the release, visit the 1.2.3 milestone.

The big new feature in version 1.1 is the History tab. After upgrading, you’ll notice that what used to be a single Edit button has been reorganized into three tabs: Read, Edit, and History. History allows you to brows the entire revision history of a document, to compare the differences between two revisions side by side, to view a single revision, or to restore to any point in the document’s history. Access to the History tab can be limited in the same way that access to the Edit tab can be, on a doc-by-doc basis.

This new feature will, I hope, bring some of the best qualities of wikis to BuddyPress Docs, and make Docs an even better way to collaborate.

The feature will be live on the CUNY Academic Commons in the upcoming weeks.

I’ve just finished tagging and releasing version 1.2 of the CUNY Academic Commons. Version 1.2 is a major feature release for the site. Notable new features and improvements:

This release cycle has been our most extensive to date, with 69 bug and enhancement tickets opened and closed against the milestone. As usual, you can read the full details of the release at the 1.2 milestone.

Sincere thanks to the Commons Dev Team and the Commons Community Team for their hard work leading up to this major release.

When I explain the CUNY Academic Commons to someone for the first time, the words ‘connect’ and ‘collaborate’ usually loom large. We provide a number of tools to make it easier for people to find each other (that’s the connecting), and then we try to make it easy for those people to work together on projects that matter to them (that’s the collaborating). Today I am releasing the first public beta of a new BuddyPress plugin that will, I hope, be an important tool in the Commons (and BuddyPress) collaboration toolbox: BuddyPress Docs. 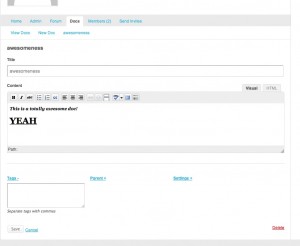 Today the project is being released in a near-stable public beta. That means a few things. First, for the moment you run the plugin on a production site at your own risk, as there are bound to be bugs and rough spots (which I hope you will report back to me!). Second, it means that it’s not up and running on the Commons quite yet. BuddyPress Docs is slated to be turned on here with the release of Commons 1.2, which should be sometime in the next few weeks. The intervening weeks should give folks in the general BuddyPress community some time to put Docs through its paces before it gets put to work here.

The official documentation states that BuddyPress Docs requires WordPress 3.1 and BuddyPress 1.3. The latter requirement is a bit of an overstatement; Docs has been tested with BuddyPress 1.2.8 and it works well. However, the former requirement is strict: though the plugin might appear to work with versions of WP prior to 3.1, certain key features will not work (in particular, taxonomies will not work correctly, so that all Docs will appear on every group, no matter which group created them). Perhaps for the 1.0 stable release I’ll forcibly prevent the plugin from being loaded on those earlier versions of WP.

Need help with the Commons? Visit our
help page Send us a message
Skip to toolbar

Built with WordPress | Protected by Akismet | Powered by CUNY